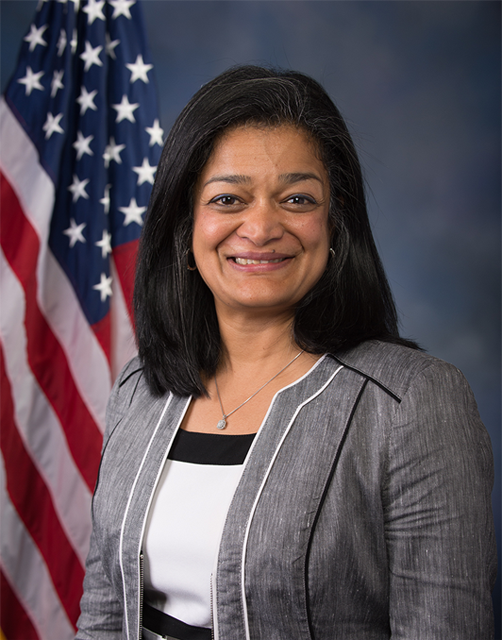 Congresswoman Jayapal is committed to ensuring that every resident of the district has economic opportunity; fairness and equity; and safe and healthy communities. She is proud of the district’s role in leading the country on issues like the minimum wage, racial equity, and innovation, and will work to support that work and lift it up as a model for the rest of the country.

Her focus is on ensuring income equality; access to education, from early learning to higher education, including debt-free college; expanding Social Security and Medicare; protecting our environment for our next generation; and ensuring immigrant, civil and human rights for all.

Jayapal will relentlessly challenge systems that corrupt our democracy, pushing for campaign finance reform, tax reform, voting rights and an end to institutionalized racism. In all of these endeavors, she’ll continue to build the movement to expand our democracy and create the political space for policy change that benefits working families and responsible businesses.

The first Indian-American woman in the House of Representatives, Jayapal has spent the last twenty years working internationally and domestically as a leading national advocate for women’s, immigrant, civil, and human rights.

She came to the United States by herself at the age of 16 to attend college at Georgetown University and later received her MBA from Northwestern University. She has worked in a number of industries in both the public and the private sector.

Private Sector:
Following college, Jayapal worked as a financial analyst on Wall Street for PaineWebber in leveraged buy-outs. During her years at business school, she became interested in applying her business skills for social good, working on economic development issues in South Chicago, and then spending the summer working on rural economic development issues for a private nonprofit organization in Thailand. Later, she worked for a cardiac defibrillator company in sales and marketing, covering territory in Western Ohio and Eastern Indiana where she was the first woman and first person of color in the sector. She left the private sector in 1991.

International Public Health and Development:
Jayapal began working in international public health in 1991 at Program for Appropriate Technology in Health (PATH), a nonprofit based in Seattle. At PATH, she served for several years as the director of the Fund for Technology Transfer, a loan fund that had tremendous success in providing capital for socially responsible health projects, including primary health clinics, small businesses, and micro-credit programs across Africa, Latin America and Asia. Jayapal went on to become a Fellow of the Institute of Current World Affairs, living for two years in villages and small towns across her birth country of India, exploring development issues. She published her first book in 2000, Pilgrimage to India: A Woman Revisits Her Homeland.

Immigrant, Civil and Human Rights and Economic Justice:
After the September 11, 2001 attacks, and in the wake of discrimination and civil liberties abuses against Muslims, Arabs, and South Asians, Jayapal founded the nonprofit Hate Free Zone (now OneAmerica). She served as Executive Director for 11 years, growing the organization to be the largest immigrant advocacy organization in Washington state and one of the largest in the country. Under her leadership, OneAmerica successfully worked to sue the George W. Bush administration to stop the deportations of thousands of Somalis across the country; to help end Special Registration of Muslims and Arabs; and to lead the fight for comprehensive immigration reform. OneAmerica also led the effort to establish an Office of Immigrant & Refugee Affairs in Seattle, and to make Seattle one of the first cities to ban asking about immigration status by law enforcement or city officials. At the state level, OneAmerica was at the forefront of the effort to preserve drivers licenses for all, regardless of citizenship status, in Washington state, and to promote immigrant integration. In 2009, Jayapal was named by Governor Christine Gregoire as Vice Chair of the state’s New Americans Policy Council. OneAmerica also led one of the largest voter registration efforts in Washington state, helping more than 23,000 new Americans register to vote.

Jayapal went on to lead the national coalition, We Belong Together, to bring a gender lens to immigration reform. The coalition played a key part in adding important provisions in the 2013 comprehensive immigration reform bill that ultimately passed the U.S. Senate with 68 bipartisan votes, but was stalled in the House.

She was appointed by Seattle Mayor Ed Murray to the Income Inequality Committee that crafted the successful legislation to raise the city’s minimum wage to $15. She also co-chaired the search for a new police chief in Seattle, during a tumultuous time as the city was under a Department of Justice consent decree.

Elected Office:
Jayapal was elected to the Washington State Senate in 2014, becoming the first South Asian American ever elected to the State Legislature and the only woman of color in the Washington State Senate. As a Washington State Senator, serving in a Republican majority Senate, Jayapal fought for gender equity, expanded access to contraceptives for all women, including those on Medicaid, and introduced legislation to increase the statewide minimum wage and provide free community college. She stood up to members of her own party against giveaways to predatory payday lenders and secured $5.25 million into transportation pre-apprenticeship programs for women and people of color. She played a leading role in the push to pass the Washington State Voting Rights Act – blocked, unfortunately, by the Republican majority in the State Senate. She received a Champion award from the Children’s Alliance for her work on ensuring equity as the state invested millions into early learning.