“Kennedy’s narrator speaks for a grand cast of saints, eccentrics, artists, blackguards and tarnished heroes, all of whose lives come together in this quirky but consistently fascinating weave of a story.” —Dallas Morning News

When it was built, the Phelan mansion was the only home on the block. In the decades countless tragedies have swept through its halls, but no matter how many times its foundations have been rocked, the old house still stands. Now, in 1958, its sole occupants are the eccentric old painter Peter Phelan and his illegitimate son, Orson, who sees all—but says nothing. When Peter invites his remaining family to hear him read his will aloud, it forces the Phelan clan to reckon with the most powerful force in Albany: their own tortured history.

Unveiling a series of portraits inspired by family tragedy, Peter takes the Phelans back into the past, as far as 1887, forcing them to come face-to-face with the origins of the family curse. As the raucous narrative unfolds, Orson does his best to grapple with his and the knowledge that the sins of the past can never truly be washed away.

William Kennedy’s eight-book Albany Cycle is one of the most ambitious projects in modern historical fiction, a kaleidoscopic portrait of a city whose heroes are its corrupt politicians, , and thieves. The Phelans are one of the roughest families in American literature, and also one of the greatest, who “can claim a place beside O’Neill’s and Steinbeck’s Joads” (Library Journal).

The Collar By Frank O’Connor

A collection of short fiction about Irish priests from an acclaimed literary talent who shines a light on a fascinating world often obscured by secrecy and sentiment.

Over the course of his long and distinguished career, Frank O’Connor wrote many stories about priests. Some of his most iconic characters are men of the cloth, and few writers have portrayed the unique demands of the priesthood with as much empathy, honesty, and wit. This collection, edited and introduced by his widow, Harriet O’Donovan Sheehy, brings together the best of O’Connor’s short fiction on the subject.

From “An Act of Charity,” the ironically titled tale of church efforts to cover up a curate’s suicide, to “The Sentry,” an exquisite blend of drama and satire sparked by the British army’s invasion of a priest’s onion patch, these sixteen stories capture the full range of pressures visited on the Irish clergy. “Peasants” is a lesson in what happens when a man of God places law and order above compassion, while “Achilles’ Heel” reveals that even a bishop can be rendered powerless by his housekeeper. “The Frying-pan” and “The Wreath” are sad and lovely portraits of priests caught between their vows of celibacy and their natural desire for human connection.

In the rituals and contradictions of the priesthood, Frank O’Connor found one of his greatest motifs. The Collar showcases an artist at the peak of his powers and shines a brilliant light on a fascinating world too often hidden in shadow and sentiment.

“One of the masters of the short story.” —Newsweek 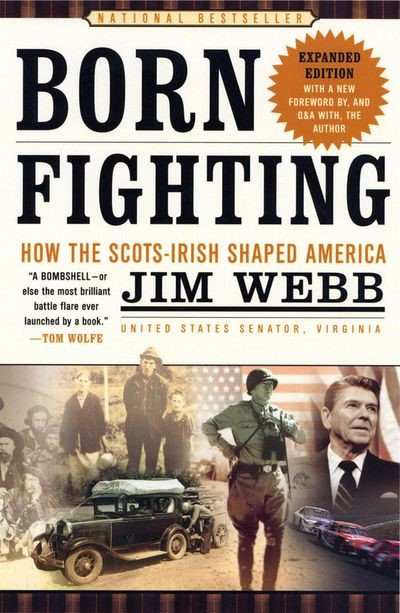 A “robust and passionate” history of the Scots-Irish people that chronicles their earliest beginnings at Hadrian’s Wall, their mass emigration in the eighteenth century, and their lasting impact on American culture (Booklist).  In his first work of nonfiction, bestselling novelist James Webb tells the epic story of the Scots-Irish, a people whose lives and worldview were dictated by resistance, conflict, and struggle, and who, in turn, profoundly influenced the social, political, and cultural landscape of America from its beginnings through the present day.

More than 27 million Americans today can trace their lineage to the Scots, whose bloodline was stained by centuries of continuous warfare along the border between England and Scotland, and later in the bitter settlements of England’s Ulster Plantation in Northern Ireland. Between 250,000 and 400,000 Scots-Irish migrated to America in the eighteenth century, traveling in groups of families and bringing with them not only long experience as rebels and outcasts but also unparalleled skills as frontiersmen and guerrilla fighters. Their cultural identity reflected acute individualism, dislike of aristocracy and a military tradition, and, over time, the Scots-Irish defined the attitudes and values of the military, of America, and even of the peculiarly populist form of American democracy itself.

Born Fighting is the first book to chronicle the full journey of this remarkable cultural group, and the profound, but unrecognized, it has played in the shaping of America. Written with the storytelling verve that has earned his works such acclaim as “captivating . . . unforgettable” (the Wall Street Journal on Lost Soldiers), Scots-Irishman James Webb, Vietnam combat veteran and former Naval Secretary, traces the history of his people, beginning nearly two thousand years ago at Hadrian’s Wall, when the nation of Scotland was formed north of the Wall through armed conflict in contrast to England’s formation to the south through commerce and trade. Webb recounts the Scots’ odyssey—their clashes with the English in Scotland and then in Ulster, their retreat from one war-ravaged land to another. Through engrossing chronicles of the challenges, the Scots-Irish faced, Webb vividly portrays how they developed the qualities that helped settle the American frontier and define the American character.

Born Fighting shows that the Scots-Irish were 40% of the Revolutionary War army; they included the pioneers Daniel Boone, Lewis and Clark, Davy Crockett, and Sam Houston; they were the writers Edgar Allan Poe and Mark Twain; and they have given America numerous great military leaders, including Stonewall Jackson, Ulysses S. Grant, Audie Murphy, and George S. Patton, as well as most of the soldiers of the Confederacy (only 5 percent of owned slaves, and who fought against what they viewed as an invading army). It illustrates how the Scots-Irish redefined American politics, creating the populist movement and giving the country a dozen presidents, including Andrew Jackson, Teddy Roosevelt, Woodrow Wilson, Ronald Reagan, and Bill Clinton. And it explores how the Scots-Irish culture of isolation, hard luck, stubbornness, and mistrust of the nation’s elite formed and still dominates blue-collar America, the military services, the Bible Belt, and country music.

Both a distinguished work of cultural history and a human drama that speaks straight to the heart of contemporary America, Born Fighting reintroduces America to its most powerful, patriotic, and individualistic cultural group—one too often ignored or taken for granted

Captains and the Kings: The Story of an American Dynasty   Taylor Caldwell (Author) ©1983

This is a great rising and falling novel about the buildup of a colossal fortune, the political power that comes with it, and the operation of a curse laid on an Irish-American dynasty and the ruthless driving man who founded it.

Joseph Francis Xavier Armagh was thirteen years old when he first saw America through a dirty porthole on the steerage deck of The Irish Queen. It was the early1850's and he was a penniless immigrant, an orphan cast on a hostile shore to make a home for himself and his younger brother and infant sister. Some seventy years later, from his deathbed, Joseph Armagh last glimpsed his adopted land from the gleaming windows of a palatial estate. A multi-millionaire, one of the most powerful and feared men, Joseph Armagh had indeed found a home. CAPTAINS AND KINGS is the story of the price that was paid for it in the consuming, single-minded determination of a man clawing his way to the top; in the bitter-sweet bliss of the love of a beautiful woman; in the almost too-late enjoyment of extraordinary children; and in the curse which used the hand of fate to strike in the very face of success itself.

Once again, Taylor Caldwell has looked into America's roistering past as a setting for a drama of the consequences of savage ambition - and its meaning then and now.