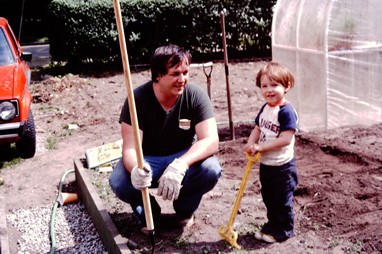 When my dad came home from work during the summer evenings, he would take me into the garden. With a colander and a basket, we gathered tomatoes, green beans, cucumbers, squash, and peppers. We sat on the cement steps just outside of the kitchen and broke the tops and bottoms off of the beans. We ate a few along the way before we gave them to my mother to prepare. In silence, we munched and savored our small bounty. My father was a great observer. He was quiet and contemplative. His humor was dry and quick, and he loved to tease my mom, my brother, and me.

As an adult, I see him in equal measure. The time and energy it took to have a career, support a family, remodel a home, grows a garden, and all while trying to spend time with us. He balanced many hats and many responsibilities. My father didn’t attend church; he watched Bob Vila on channel 2. He was a creator. Instead of sitting in a pew listening about Christ or God, he communed with nature and with built things. I am not entirely sure what his spiritual beliefs were, he didn’t really speak about them, but I feel as though the religion of his youth was different than the relationship he had with the earth and the art of creating. 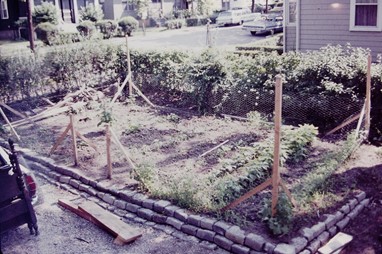 “Making art is no different than prayer”

Cathedrals were built as a way to reach the heavens, to connect with God. Art, architecture, writing, composing music, building, and farming are all acts of creativity. The drive, the need for imagining, for making something is a prayer we choose to offer. We spiral back to the very essence of our soul—to cultivate and to expand. We are a reflection of where we came from and if we tap into the place within ourselves, we flow and co-create with joy. We don’t have to build a cathedral to ascend to heaven, it is here on earth inside of us. My father loved the design, math, and the act of taking an idea and constructing it with his own two hands. He worked alone, never could we afford, nor did he want to hire anyone, it was his time to tap into his form of prayer. No rules or doctrine. He got into his groove and time fell away. He’d lose hours. Or should I say, we’d lose him for hours? 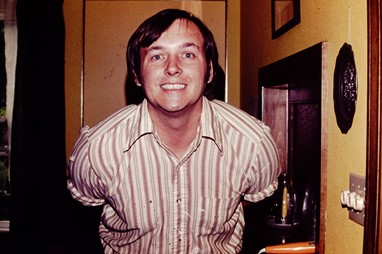 I remember seeing him watch the night sky during a summer storm. He stood underneath the small barn we had on our property when we moved out into the country. The wind whipped, thunder rolled and all I could see were flashes of him illuminated by lightning. No fear, just pure awe, and wonder. This wasn’t a one-time thing. The natural world dazzled him. It called his name. From his gardening days, to storm watching, to later drifting out on our boat in the bay, he found ways to ground into mother earth. I often wonder if there was something deep within his soul that flickered in remembrance of who he was before he came into this lifetime. Within his silence his presence was unmistakable. He was solid and level-headed and when he did speak, he spoke with measured words.

As I marvel at the soul connections, the ways in which my father rooted into the earth and honored creation with his hands and heart, I understand these are the lessons he gifted. Connecting with your higher Self, tapping into the creative stream of all that is and all that ever was, doesn’t have to be done in a church or even with other people. The sanctuary we seek is within, and co-creation happens when we trust and allow ourselves to fall into the symphony of our desired expression. Sure, some of the projects my father did were necessary, but there were pockets of time, where he became enchanted. As a child, I watched him and caught subtle glimpses of this magic, and I felt the difference.

As a writer and creator, I see it clearly. I am filled with deep gratitude for the unspoken lessons he gave to me. The years of spying on him, of being curious, took residence within me, and now I understand. In writing these Snapshot Stories, I have found a way to take his art, his photography, and pair it with mine. As I co-create with the divine, I co-create with him. To think we are separated by death is an illusion. He is with me in the garden, on my long walks in the woods, and when I am dreaming. With my words I honor him. The legacy of art and prayer, of silence and sacredness, is weaved into the fibers of my soul. May these threads travel beyond me, beyond my father and our earth walk together. May my children and their children know him, as I do.

Nicole Hendrick Donovan is an author, reflective storyteller, and speaker who offers personal essays, memoirs, and workshops as a container for others to seek their inner wisdom and truth. Her memoir, A Life Suspended: A Mother and Son’s Story of Autism, Extinction Bursts, and Living a Resilient Life, brings the reader into the home and heart of a family in crisis. Donovan’s vulnerable storytelling cultivates compassion and understanding, opening a door where acceptance and empathy expand. Nicole is a contributing writer to The Mighty, Autism Parenting Magazine, Finding Cooper’s Voice, and Herself360. As an extension of her offerings, she is the owner of Rose Ray Healing Arts, and curator of her signature Rose Ray Surrender Spray. You can connect with Nicole on Facebook and Instagram @nhdwrites, as well as nhdwrites.com