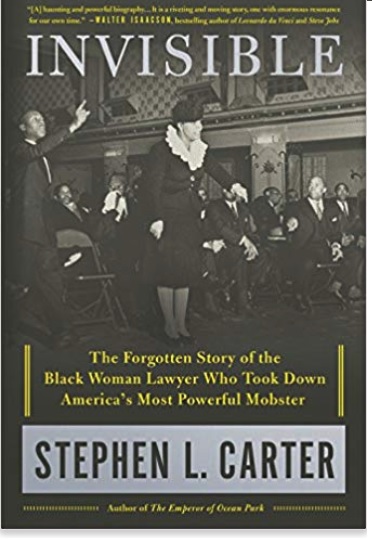 It was February 1, 1935, the thirteenth floor was unusually unoccupied but tonight was buzzing with activity, for it had been taken over for the next few days by the team of lawyers assembled to work with Thomas Dewey, the special prosecutor for organized crime.  One of the lawyers logged and tagged the women as they arrived.  Her name was Eunice Carter, and she was both the only woman and the only Negro on the team.

Months earlier she had come up with the theory that the Combination, which controlled prostitution in the city, was run by Lucky Luciano, the most powerful Mafia leader in the Country.  Dewey had been skeptical but had finally agreed to let her look into it.  Eunice had drafted another lawyer to help.  Together they had assembled the evidence and badgered Dewey until he yielded.  The team had convicted some minor organized crime figures, but Luciano had proved untouchable.  There was no way to connect him with the multifarious businesses, legal and illegal, from which he took a cut.  Everyone was scared of him.  He had risen to the top by ruthlessly eliminating those above him and those who were his equals, including some who had helped him in his climb.  No one would testify against him.  So Dewey had agreed to try Eunice’s idea. 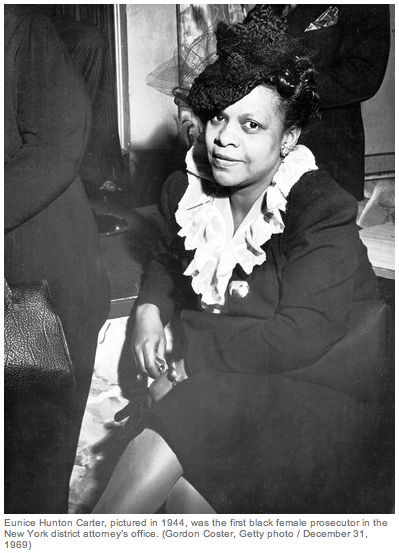 The February raid produced a wealth of witnesses and leads, and as evidence against Luciano mounted, he slipped out of the city.  He turned up in Hot Springs, Arkansas, famous at the time both as a place to gamble and as a place for fugitives to hide out.  Local authorities kept finding reasons to keep him there rather than let him be extradited.  Finally, the state attorney general intervened.  The mobster offered him a $50,000 bribe. To no avail.  The judge told Luciano’s lawyers he had no choice but to send him to New York.  Three city detectives accompanied him on the train ride northward…..

In June that same year, to widespread astonishment, the jury convicted Luciano of compulsory prostitution.   Eunice, listening to the verdict in the courtroom, probably kept her usual poker face.  But she must have felt a certain satisfaction.  She was black and a woman and a lawyer, a graduate of Smith and the granddaughter of three slaves and a free woman of color, as dazzlingly unlikely a combination as one could imagine in New York of the 1930s, and without her work, the Mafia boss would never have been convicted.  She was an ambitious woman and had plans.  She was just short of her thirty-seventh birthday and had come a long way from her segregated Atlanta childhood.  Hers was the idea that had put away the country’s biggest gangster.  In the process, she had become one of the best-known Negro women in America.  She would receive honorary degrees, be featured in Life magazine, lecture around the world, be handed medals and plaques from civic organizations everywhere.  She would become a prominent and influential figure in the Republican Party.  Her professional future seemed to pulse with bright and endless possibility.  As she sat there on that fine June afternoon, she must have believed that she had only to reach out her hand and choose a direction.

Eunice Carter was my grandmother.  This book is her story.