March is National Women’s History Month
In 1987 the US Congress designated March as National Women’s History Month. This creates a special opportunity in our schools, our workplaces, and our communities to recognize and celebrate the often-overlooked achievements of American women. Each year there is a special Theme and women whose lives exemplify that theme are selected as National Honorees.

Barbara Hackman Franklin’s career is trailblazing for both her extensive government and private sector work and for her efforts to open the doors to other women leaders. Serving five presidents, Franklin led efforts to increase the number of women in government, normalized commercial relations between the U.S. and China, and is an expert on corporate governance. 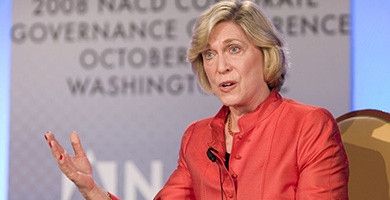 Franklin’s public service began in 1971, as a staff assistant to President Nixon. She led the first White House effort to recruit women for high-level government jobs, nearly quadrupling the number of women in those positions (1971-73). Her efforts are recounted in the 2012 book by Lee Stout, A Matter of Simple Justice: The Untold Story of Barbara Hackman Franklin and A Few Good Women. Following this, she was appointed an original Commissioner of the Consumer Product Safety Commission, where she focused on safer products for children (1973-78). As the 29th Secretary of Commerce for President George H.W. Bush, she increased American exports with initiatives in China, Russia, Japan, and Mexico. Her 1992 historic mission to China normalized commercial relations with that country, removed the ban on ministerial contact and brought back $1 billion in signed contracts for U.S. companies. Trade with China grew dramatically in the ensuing years, as did foreign investment.

Franklin is President and CEO of Barbara Franklin Enterprises, a private international consulting firm. She has served on the boards of directors of numerous public companies, private companies, and non-profit organizations. She has also served in leadership roles for many professional organizations and was a founding member of Executive Women in Government (1973). Franklin graduated with distinction from the Pennsylvania State University and was one of the first women graduates of the Harvard Business School. Among her many honors, awards, and honorary degrees, she was inducted into the Connecticut Women’s Hall of Fame (2013), The National Association of Corporate Directors (NACD) Directorship Hall of Fame (2014), and the Financial Executives International Hall of Fame (2015). She resides in Washington, DC, and Bristol, CT with her husband Wallace Barnes.

Ms. Holian joined DraftKings' executive team after serving as a strategic advisor to the Company and its leaders since the Company's inception. Prior to joining DraftKings, Ms. Holian was CEO of Gemvara, a leading online retailer of custom-made fine jewelry. Previously she was a key member of the Vistaprint executive team for 11 years, joining the company prior to public launch and leaving with revenue at more than $1 billion per year. Ms. Holian served in numerous roles, including Global CMO where she was responsible for all global revenue.  She also led the company's European expansion and served as President, European Business Unit.

"Janet is a trusted advisor, a talented marketing executive and a steady and experienced leader," said Jason Robins, DraftKings Chief Executive Officer. "I have long relied on her advice and guidance and am thrilled that she is joining DraftKings as our Global Chief Marketing Officer." Ms. Holian holds a Bachelor's degree in Economics and Business from Westfield State University and graduated from the Tuck Executive Program at Dartmouth College.